New edition of the habitat list of South Tyrol

In 2007, a working team led by Susanne Wallnöfer (University of Innsbruck) published a checklist of habitat types that were previously known or most likely to occur in South Tyrol. The list subsequently became the standard for habitat mapping in South Tyrol, which serves as a basis for the assessment of interventions in the landscape and for the elaboration of measures for habitat connectivity, enhancement, and conservation. Since the publication of the first edition, the state of knowledge has improved significantly, also due to numerous suggestions for improvement from users. Adaptations also resulted from the requirement to establish a clear reference to Natura 2000 habitats. The aim of this special project is to compile and publish a new, supplemented list together with the institutions involved, the Office for Nature and the Museum of Nature South Tyrol.

A working group with representatives of the three involved institutions dealt in detail with the checklist in numerous working sessions. In the process, they rediscussed habitat by habitat, added new habitats, and made necessary adjustments and corrections resulting from habitat mapping practice in recent years. As in its first edition, the list is guided by vegetation science criteria: that is, to grasp habitats as much as possible through plant sociological associations. The challenge in this work process is to preserve the basic structure of the first edition as much as possible, in order to be able to retain previous habitat allocations (including those in databases). The new version of the habitat list should remain the standard for habitat mapping as well as for any data collection in the field of flora, fauna and ecology. It is also planned to publish the list in 2022 in the journal Gredleriana.

Museum of Nature South Tyrol, Office of Nature of the Department of Nature, Landscape and Spatial Development.

Save the date: Symposium on the inner-Alpine dry meadows of the Terra Raetica 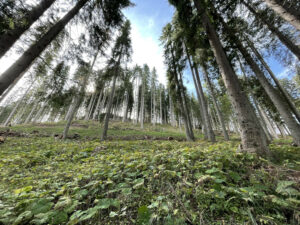 Biodiversity and forest management – study within the COST Action “Bottoms-UP”