The woodland brown butterfly in South Tyrol – phantom or reality?

Project description and goals: The woodland brown (Lopinga achine) is a butterfly species endangered throughout Europe whose population is continuously declining. The species is an indicator of near-natural forests especially ones that are predominantly comprised of beech trees. The species is classified as “threatened” and is on South Tyrol’s Red List. So far, in our region the butterfly has only been observed on the Mendel massif. However, the last findings of the species were made twenty years ago.
With this project, we want to investigate the occurrence and distribution of the woodland brown in South Tyrol in order to understand more about the ecology of the species in our province and to develop a customised monitoring system for their conservation status. Another goal is to propose concrete measures for the protection of this species in South Tyrol. In addition, we generally want to improve our existing knowledge of butterfly biodiversity in the forests on the Mendel massif: as all butterflies occurring in the specific sites are surveyed.

Methods: Between June and July, classic butterfly surveys (the catching with a net, identifying and releasing adult butterflies) have been undertaken. This project focuses on locations that seem suitable for the woodland brown. In the first half of June, we inspected the area to select several examination locations. From those selected, a transect survey was undertaken, which methodically corresponds to that of Biodiversity Monitoring South Tyrol’s standard programme. The transect surveys of the selected locations were repeated on two further occasions, at the beginning and end of July. In addition to these transect surveys, non-standardised surveys on forest road edges and small forest clearings are also undertaken.

In the 2020 surveys, the woodland brown could not be found despite a targeted search. However, as it is basically a rare butterfly, it cannot be excluded that it was not recorded in the surveys, although it does occur in the area. Specific searches will therefore be carried out in 2021 to continue monitoring its occurrence.

Although the woodland brown has not been found so far, there are also positive reports: The surveys have shown that the forests of the Mendel forest are home to a large number of butterfly species. The research team was able to survey a total of 36 species, including the (Eurasian) white admiral (Limenitis camilla).

“The combination of light forests, open and sunny locations, as well as some bodies of water such as fire ponds, obviously provide a suitable habitat for many species,” says butterfly expert René Federspieler, who studied the forests on behalf of Eurac Research. Some of the butterfly species were identified for the first time in this area. The project also contributed to the completion of the regional butterfly database.

Distribution of the brown marmorated stink bug and its parasitisation: a comparison of fruit growing and natural sites 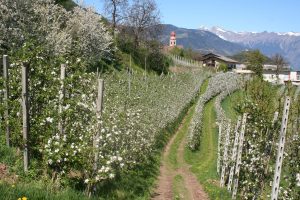